Alana and I are extremely close in our thinking, and our likes and dislikes. There is, however, a slight generation gap, as I'm *gasp* 5 years older. It usually doesn't show up except in the songs we liked in the early 80s, mainly I suspect because "the 70s" doesn't usually come up much in conversation. I was Logan's age in the middle of that decade, while Alana was still just a little tyke. So, I offer this web site to her as a connection to my tween years.

PlaidStallons is a blog about the 70s. Primarily, the blogger posts pictures from 1970s catalogues, with an emphasis on clothing and toys. He occasionally posts links to 70s TV shows (I just came across a three-part episode of the old sci-fi garbage man show, Quark), and other items of 70s pop culture.

If you know me, you know what I'm primarily interested in. That's right, the toys (and, oddly, more often the packages) They trigger major episodes of nostalgia ("I had that!", "I remember that!", and, most frequently, "I wanted that!!!").

Here's a picture of the G.I. Joe Field Training Center. I believe my brother had this, though we shared as we were both huge Joe fans: 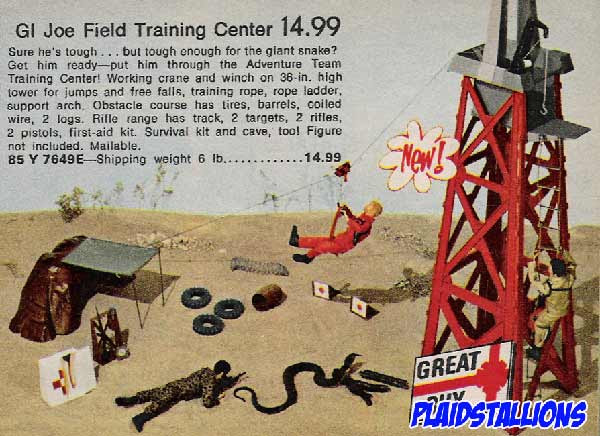 Plastic model kits were huge in the 70s, probably because there were no real video games until the ned of the decade, and then they were horribly expensive. At some point I had all of the models on this page. (I hadn't thought about the one in the bottom, right corner since, oh, the early 80s? It wasn't tied to an actual TV show, it was just a cool spacecraft. Oh, and the plastic was glow-in-the-dark green.) 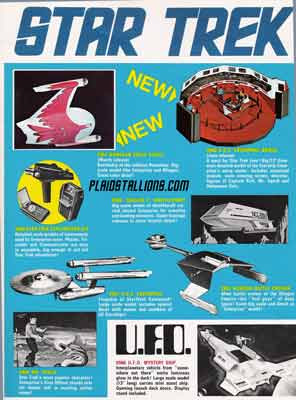 The 1970s were a period of transition, style wise. By 1978, casual clothing wasn't that much different than it is today. The early 70s, though... oh, man, it's like everyone was clothed by a costumer from a bad sci-fi flick. I distinctly remember having not one, but two polyester leisure suits during this period (one was maroon, the later one was beige).

I mentioned the packaging earlier. This hit home when he posted a pic of a Halloween costume in a box. You don't see that now, but the cheap, superhero costumes of the 70s, made of some vaguely plastic-infused material with a thin plastic mask (I can still smell the plastic as it off-gassed) came in cardboard boxes. I completely forgot that. The box itself triggered deep memories that the costumes did not. Weird how our memory works. 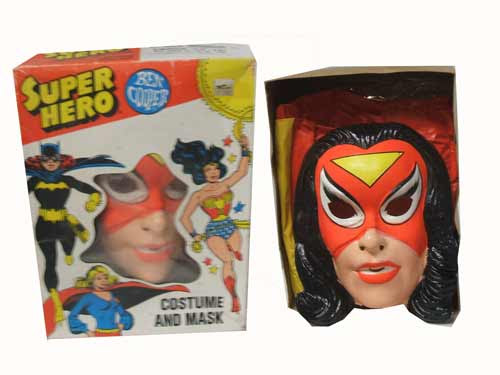 There's some pretty obscure stuff on this site that I hadn't thought of for decades. I mean, like, Crazy Foam, a bath foam/soap alternative that shot out of a can painted like a superhero's face. 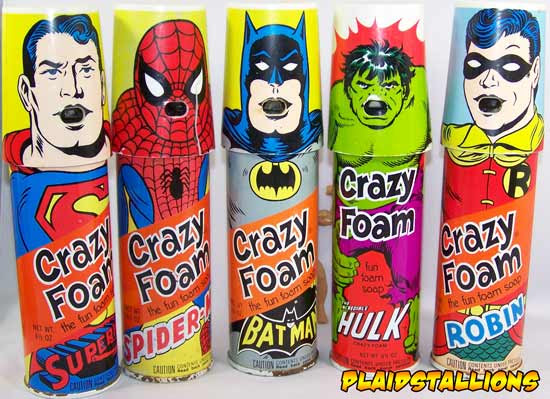 The blog really hits me personally because the blogger is Canadian. For instance, he mentions Uncle Bobby, the host of a kid's program that everyone in Ontario of a certain age will remember. I never cared for the show, myself, and always found him kind of creepy. That makes me feel bad, now, as Bobby Ash (the actor) was apparently a nice enough guy.

The blog has pictures taken from Consumers Distributing and Shop-Rite catalogues. CD and Shop-Rite were catalogue stores. They had display cases with jewelry, watches, and the like, and they had the occasional big item on the display floor. Everything else was in the back, on shelves. You walked up to a bank of catalogues and pulled out an order form. You filled in your name, the page number where you saw your item, and then the item number. You handed it to someone at a counter, and they went back into the warehouse section. Minutes later, your item was sent down a roller track, where someone picked it up and took it to the cash register. You got to inspect it at that point.

The Wikipedia entry on Consumers Distributing mentioned that there was a perception that things were always "out of stock". That's a fair description. It was frustrating to fill out the form, stand in line, only to find that the item was gone. They partially blame Wal-Mart in Canada for CD's demise, but I don't recall Wal-Mart being that big in Canada when CD went into bankruptcy. I worked at Kodak Canada in the 90s, and I heard some "interesting" things about how they treated their vendors. In the end, when they started to run into problems, none of their vendors were really willing to extend them much credit.

Of the two, Shop-Rite was my favourite. It didn't last as long, and it was considered a lesser chain compared to CD (even though it was owned by the Hudson Bay Company). What I liked about it was that Shop-Rite sold Avalon Hill wargames. I still have a couple, including a copy of Panzer Leader (my first wargame, 35 years old this year) that came from Shop-Rite. Now that I think about it, for a while you could buy SPI wargames at The Bay. Ah, memories...

Anyway, check out PlaidStallons for a trip down memory lane, or for a pop-culture tour of an unfairly forgotten decade.

Thanks to Shane Ivey for mentioning this site on Facebook.
Posted by Unknown at 12:58 AM